The light-filled unique and eco-friendly home designed by Nico van der Meulen Architects is situated in Inanda, with views of the Sandton skyline to the north. The stand is 1511 sq.m. and the house faces 15° east of north.

Upon approaching the home the first view is of the cantilevered porte cochere screen of suspended steel tubes with double sliding garage doors clad in dark limestone to blend with the wall. A steel sculpture by Regardt van der Meulen twirls on a podium next to the front door built of privacy glass.

Upon entering the transparency of the house becomes evident with views out over the multi-level hall, lounge, spa and pool to the water feature and the garden beyond, as well as over the double volume family room, dining room, lanai and kitchen. The whole of the living/kitchen/ breakfast area opens totally through the use of frameless concertina doors to the lanai and garden.

Although the spa, pool and water feature are three separate bodies of water, the effect created was that it is one interconnected system flowing into each other.

Sliding glass panels hide the bar and kitchen when not in use, creating a more intimate setting, while a skylight lit catwalk between the main suite and guest bedrooms allows views of the living spaces and garden through the brise soleil on the north side.  On the catwalk a study, pyjama lounge and kitchenette are hidden behind sliding wooden panels. The study and pyjama lounge leads onto an expansive private balcony.

The LED illuminated polished concrete and wood staircase cantilevers out of the wall with vertical steel bars acting as balustrades and supports at the same time. A recessed illuminated handrail forms a graphic line in the wall, while a hidden horizontal sliding door enables the owner to cut the upper floor off from the ground floor for security.

The main suite is also placed on the north-east corner of the first floor, divided by sliding smoked glass screens. The bathroom with free-standing spa bath gets the morning and winter sun, while the bedroom is exposed to the winter sun. Expansive his and her dressing rooms are situated behind the bedroom and bathroom.

On the opposite side of the building are two guest suites, both north facing with en-suite bathrooms and walk-in cupboards.

A geothermal system is used to heat and cool the home, and also to heat the pool and spa.  Nine boreholes were sunk to a depth of 100 meter for this purpose, and a special room created in the basement to house the equipment. The photo voltaic panels on the roof have an output of 10KVA, while rain water is harvested and the whole house is double glazed, except for the frameless concertina doors.

Also in the basement is a home theatre with an adjoining light-well which allows winter sun to penetrate even this space through sliding doors into the atrium created at the bottom of the light-well. A window looks into the spa.

All the furniture was also supplied by M Square Lifestyle Necessities. 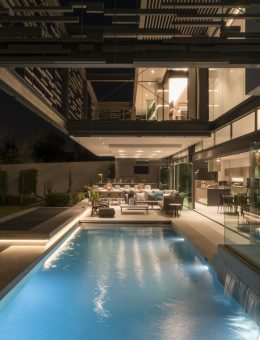 The light-filled unique and eco-friendly home designed by Nico van der Meulen Architects is situated in Inanda, with views of the Sandton skyline to the north. The stand is 1511 sq.m. and the house faces 15° east of north. Upon approaching the home the first view is of the cantilevered porte cochere screen of suspended […]
Más del autor